a1-shroom-spores in #dlux • 2 months ago

Welcome to [day 1 of] Cine Proposal #28 to Create a VR Cinetv Theater.

Once upon a time, I created a 3D Theater on #Dlux. Today, we will begin the process of remaking this model into a fully functioning 3d VR #cine project. Before we go any further, let's go over some of the information from the Proposal post.

Nav Mesh - a process which makes walls and objects appear solid in the 3D space.

GLTF - The type of 3D file which this project will be stored as for public access.

DLUX - A Hive side chain/project run by @markegiles and @disregardfiat. DLUX will make the scope of this project possible.

Fork - Copying the entire model AND the code of the project [through a repository].

Glitch - A github overlay. This is where hive users can fork the code for the 3D theater. Redesign of seats.
I really like my theater seat design but it's a bit off. The part you would sit in is too skinny. the color is horrible too. It should be maybe black with a red cushion area. Something about the seat isn't realistic. It need an actual texture, not just a solid color.

I will delete all the original blue theater seats. Then I will make a new model to add after the nav mesh is created [they will not be solid].

New "Cinetv Theater" sign that actually glows.
The new theater will say "Cinetv" in 3D block letters. I will use programming to make the letters appear to "glow" like a lit up neon sign.

Nav Mesh.
A "nav mesh" is what makes walls and other objects solid in video games and other 3D spaces. You will be able to walk around in this Virtual theater like it is a real building! [You need to actually walk though the doorways etc.]. Once you are in the Theater it's like a "real" building. Think grand theft auto online or 2nd life.

Copy uploaded to the blockchain.
I will use glitch/dlux to actually upload this 3D model to the actual blockchain. There will be a spare copy on the hive blockchain forever. Totally open sourced and decentralized!

Cinetv branding on the walls and other patching/textures to make the building realistic.
The inside walls of the theater look fake because they are just a solid color. THey need some patching like brick textures ... not to mention some fake movie posters and cinetv stickers.

Public GLTF file copy.
After the theater is complete, I will store a copy of the 3D [gltf] file on tinkercad. Any Hive user will be able to copy the project and make any changes they want! They can change the color of the theater, put their own ads on the walls, change the screen size, add extra rooms etc.

Development of front entry room.
The front room of the theater is too blank. I made a really cool soda machine and a table/countertop area for a snack bar. I need to make some interesting 3D assets like an actual popcorn machine etc. so the front room actually looks realistic.

Public Glitch project.
The actual code itself will be hosted on glitch [github]. That means anyone can edit the actual code, which includes the audiochat functions, 2d files etc. You can also fork the entire project onto your Github repo. Cool huh?!

Improvement of the entire 3D model in general.
I need to make sure the entire model as a whole has no mistakes and is also s small of a file as possible. I will connect all the walls to the floors etc to assure there are no mistakes and all the proper shapes align. I will also make sure doorways are accurate to real life proportions you would see in a real movie theater building. The first major change I'm going to make is to remove the underground part of the theater. The theater model I made has a beautiful set of steps that goes under the first level of the building. Frankly I'm proud of the way I was able to manage to copy the architecture of a large scale Theater seating arrangement.

As much as it pains me, I have decided to delete the [red] "staircase" flooring. Deleting the underground section will make things much simpler. The nav mesh builder [on glitch built by @disregardfiat and @markegiles] is still in it's infancy. It works well, but I don't want to shoot for the moon here.

The project also shouldn't be too complex because I want people to be able to fork the Theater project and launch it themselves [with custom updates if they want]. Building a janky nav mesh is one thing, but I don't want to make things hard for people when they make basic changes to my project. I actually sort of like the smaller 1 story Theater building.
It reminds me of a smaller independent theater where hipsters watch popular old movies like Rear Window or Casablanca. Above you can see the hole where I cut out the underground area of the 3D theater. The doorway you can see leads to the front room [with the soda machine, snack bar etc.]. Below is the the same doorway but seen through the front entrance. At this point, I am going to carefully recheck the model for mistakes. I want to make sure all the angles line up. If they don't there could be serious problems later, especially with the ghetto ... i mean ... basic .. nav mesh builder. 🤣😂 It will also help keep the file small. Not to mention help the 3D Theater look like an actual IRL Theater. Below is the new, flattened out version of the Theater room [where the movies will be watched]. The room looks a lot smaller, although it will fit the same amount of seats. The room has a smaller height but identical length and width. Below is the same room from the opposite wall. This is the actual wall where the movie will be "projected". You can see I left a small staging area right against the wall. I think this shape helps the room look a bit more realistic. Usually there is a large step like this in front of a screen in a real life theater.

At this point, I decided to start a Glitch project. This way, I can check the model from the ground view [walking around]. This is especially important to check things like doorways, which is important for a functional building [with a nav mesh]. This Glitch project is where everything will come together. We will put the other models into this project [cinetv sign, ticket counter, soda machine etc.]. This is also the place where the Nav Mesh builder is.

Soon, I will make the file of the empty, hollowed out 3D Theater. For now it is private, in case I find another mistake, the doorway is too small etc. In the future when the file is public any user will be able to upload the GLTF file into a 3D tool and change the Theater however they want.

I was in altVR watching Black Widow in a theater.. Sadly I cannot seem to find it again. 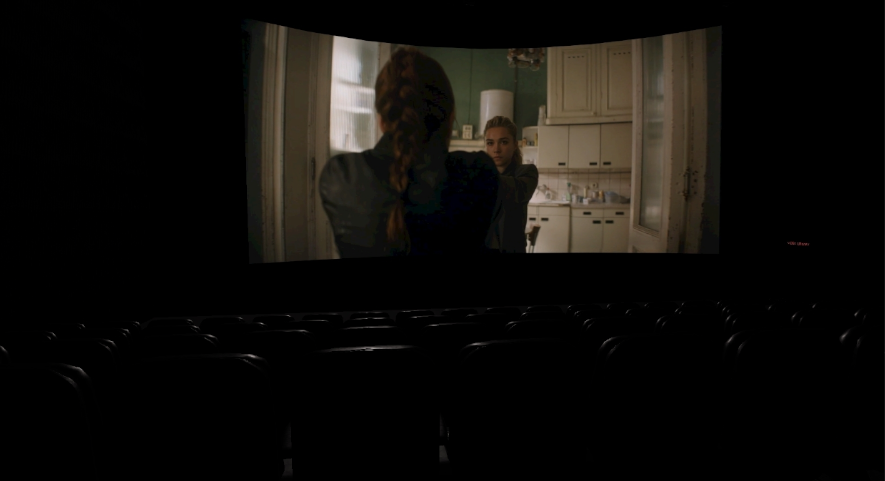