Titanic is a movie of love, sacrifice, disaster and memories. I was only 12 when I first watched the movie, though I was young, it made me emotional that at a point I cried, I could feel their passion for each other that dying was nothing to be scared of. The movie started as a story from an old woman who happened to be whom her lover at that youthful age died for in the movie Titanic, that scene made be believed sacrifice are never forgotten as long as that entity to which the sacrifice was made for lives.

Somehow the movie at that early age changed my perspective above love, it tells how love is more than just the feeling but what we are ready to offer for someone or something we love. The movie seems to redefine love to me in a broader term. That early childhood programming about love guided me all through my growing years, I wanted to do more than just expressing love. I'm not too sure if I am ready to die for love as at now but then I was not scared of dying.

I watched through the pane window of my neighbor who then had a television with keen interest how Jack meandered around concerned for the one he loves, sometimes I just sit and thank God that love was something I learned from childhood, yeah, there was this parental guidance but what we see has more influence on us and the movie affected my psychology about love. 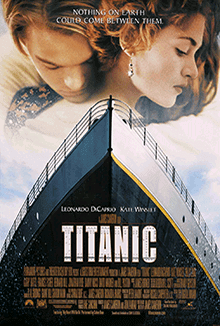 Jack hanging on a broken part of that ship fulfilled his promise of love to Rose, that scene captivated me the most, he had the chance to be on that broken sheet but decided to give it away, even his cardigan that would have buy him more time wretched in that ocean, he took off and gave away. Someone may wonder why Titanic became my favourite movie at childhood, I know just few people own TV and DVD set at that time and we were limited on the number of movies we watch, however Titanic was able to make me see myself in the future. I knew I was going to get married, I had envisioned a happy and fulfilling family for myself so it was able to enlightened my understanding on how lovers fight for each other and at some point sacrifice. No movie told me that, instead they were packed with actions that only made me imagined myself as a warrior and at some point I practically engaged in combat with friends.

Yeah, everyone with a different taste. Thank You for reading through, and I'm glad you liked it

What a beautiful writing mate. It is very touching to read how this classic film influenced your views about love. I think I watched Titanic when I was a young kid but honestly I don't remember much about it although I obviously know the story.

Yeah, Titanic is an old movie, there's just a little someone could remember, I just did not forget most scene because of its impact on me. Thank You for your wonder comment, I appreciate