All you must have observed in the movie baahubali was war, snap it out, the movie held much meaning than just the show of mastery in swordsmanship. Baahubali is an India movie that featured values for culture, this was seen from their style of dressing, the energy put in the tradition to protect a woman carrying a burning coal until she got to the altar, and the passing on of incomplete task to the next generation. You may wonder why I have unforgettable experience with this movie, sit tight let's ride along. 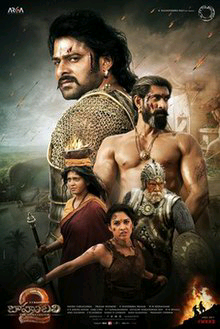 I watched this movie a year ago while in my final year, at first it was just like any other film of war and conquer until I watched it the second time translated in English. The movie taught me courage, resilience, and true leadership. The man baahubali was the strongest and wisest, yet, he humbled himself and lived among the common people. I realised victory in life sometimes is not all about ones strength but the kind of people around him, baahubali chose the common people not minding his background and they remained loyal to him.

The protagonist in this movie was not quick to identify himself among strangers, I found this quality attractive. Most times we are tenpted to let the world know who we are quicker than necessary, as much as possible baahubali was reserved about letting the world know who he was. This attitude was what he portrayed when he went to espouse a lady from a different town. He preferred to live a simple life, I learnt to observed this simplicity in my life after watching this movie and it had helped me maintain some level of peace.

Vision doesn't just die, it is passed on to the next generation. This is another beautiful experience I learnt from the movie. His brother rejoiced after the death of baahubali, he must have assumed his dreams died with him, but no, it continued with his seed. It's very important that we write our goals down clearly, our offsprings might just be the ones who will take up the banner and accomplish this dreams. Our visions still live on if it is clearly defined, an important lesson I picked from the movie.

Finally, live for something and die for something.. let your existence have a meaning as well as your death. Its not enough to just live, until you live for something. Baahubali died in other for his son to live and probably grow up to fight and bring freedom to his people. This idea helped shaped my life into finding purpose. Maybe I was living too carelessly until I encountered this movie, and the experience is unforgettable because it has shaped my life as well as my thought pattern.

I bet your life would be transformed if you watch this movie baahubali and follow it carefully.

Baahubali was the biggest hit at that time.. people were waiting for the second part with equal excitement.
All wanna know why Kattapa kill the Baahubali....

Then boom! It came out and as expected it was exciting