Is it a passionate tale of romance? Or should we call it a gothic story? Tall Girl by Zhingha Stewart in my opinion is an interesting movie of romance. It is a tale of love, jealousy, self-discovery, and pain, focusing on the main characters of Jodi Kreyman, Jack Dunkleman and Stig Mohlin. The atmosphere at Orleans high school clearly mirrors jealousy, ridicule and love.

Jodi Kreyman is a girl of 16, 6.1½ft tall, slightly abnormal for a girl of her age. She became a thing of ridicule among her age mates and hated herself for that. Jack Dunkleman a young boy Jodi met in high school seems to see her differently, he had feelings for her but decided to maintain the friend zone after discovering Jodi has a taste for taller guys. Jack Dunkleman is a short guy, he carries a milk crate around and always try to talk Jodi Kreyman into loving herself. Jodi Kreyman believes she abnormal, this make her isolate herself from her peers. Her family tried to help her accept who she by inviting people as tall as she is but Jodi Kreyman became offended.

Jodi Kreyman believes she had finally found a guy who will understand her when Stig Mohlin, a student transferred to her high school from Sweden was enrolled. He was her spec, tall and handsome and had a long hair but Kimmy a popular female student in the same high school had eyes for him. 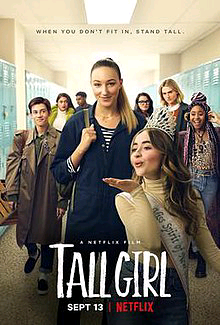 Kimmy and Schipper became jealous of Jodi Kreyman but continued to ridicule her, they even played a prank on her pretending that Stig was the one calling.

Jodi Kreyman was shown a video of Jack Dunkleman fighting Stig Mohlin after making jest of her in a party among group of people. It was then she realized she don't need to be intimidated about her height, she was beautiful and unique the way she is. She appeared at the pageant in her school on the heels jack Dunkleman gifted her, ''how's the sky up there" people asked, confidently she smiled and walked up to the stage where she declared her status and how she now accept her height .

She gave Jack Dunkleman a chance and enquired why he always carry the milk crate around him.
" For a day like this when I will need it" , he climbed on it and gave her a kiss.

Nevertheless, I persevered and all in all, I recommend Tall girl. I challenge you to change your perspective about yourself over what people ridicule you of after watching the movie.

I loved the movie because of this girl, she did a great and very special role
She filled our hearts with joy

Its good to know you like the movie this much, its true that jodi's role on the movie was an interesting one and she made it all interesting