The movie triumph is a true story of the storywriter Michael D. Coffey . It's a movie that portrays our mind as the force behind achieving anything and not our physical abilities. Mike was born an handicap. Against societal belief, he wanted to become a wrestler. He was raised by his father who never failed to make him believe he can do anything, he wanted him to believe he is just like everyone else and not the person he is outside. His father at a point lost faith in him after he loss a wrestling match at age 8 that made his condition worst. His dad never told him but then, Mike never stopped to believe he can be a wrestler.

The movie triumph, help shows how important a childhood programming could affect a child's mind even at adulthood. Though mike had palsy, his father's parenting could still speak loud in his head to give his best at everything. 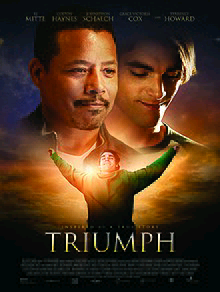 Mike met with Jeff in a gymnasium and they later became friends. Although Jeff was positive around Mike, he had a few doubts Mike could make it in wrestling. Mike's persistence showed he wouldn't give up, so Jeff decided to help him become the man he dream to become. Mike wanted to prove himself to the world that he can achieve this dream, but the more he tried was the more he lose.
"You don't have to prove anything to anyone, the only person you should prove anything to is yourself" his dad and coach told him.

The fascinating thing about the movie is how Mike accepted who he was but did not allow it hinder his dream of becoming who he wanted to become. The society tagged certain people as handicaps, and disabled, but that predicament is not what makes you, what you believe you are, is who you truly is.

Mike did not win the final wrestling, but his endurance at the wrestling match gave him an honor, and he proved to both himself, the world, and his dad that he was capable of becoming anything as long as he believed. Take a step, take a chance, believe in something the society look as impossible and change the narrative. Everything is possible, watch the movie