[CineTV Contest: Memories] My Childhood memories are full of Cinema

Greetings, I present myself in the eyes of this community with a big hug, and I came to tell you that I decided to participate in this contest originally out of love for the film arts. I saw a lot of the post of the contest talking about their "portal" to films being a video club, But do you ever wonder: How is to grow as a child of a video club owner? I introduce myself, my name is Jesus and this lovely Tinbel video club was the store founded by my parents not long after I was born. 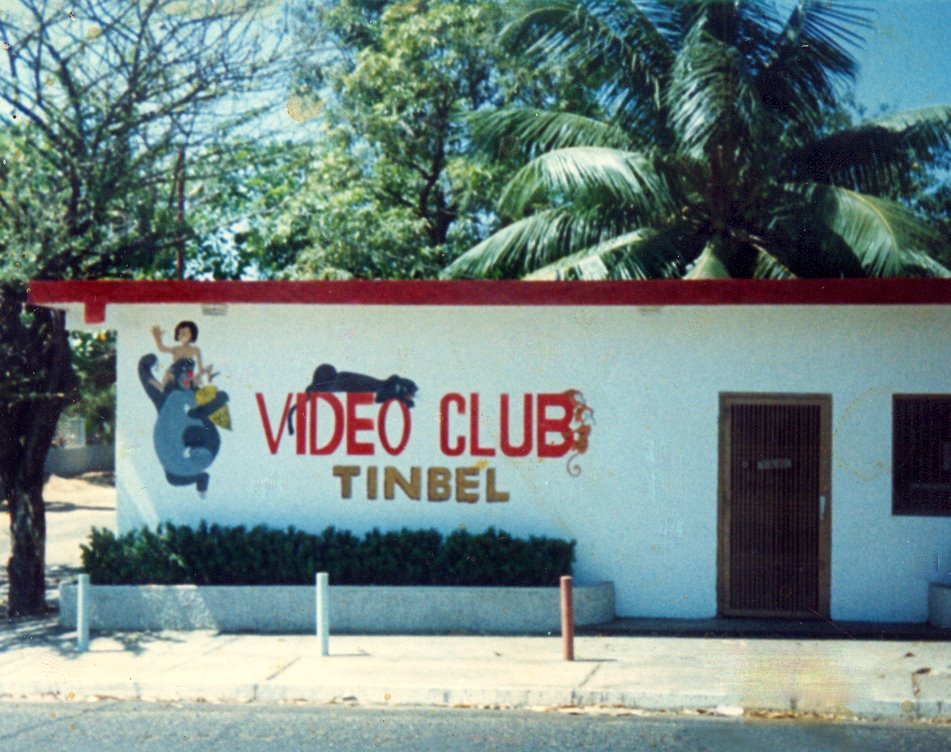 Before going into the subject, I want to give a big warning, I'm not a fan of any film, there is no major devotion for any film in my life, not even Disney "Fantasy" or "Pinoquio" would be able to be called my "Favorites", why is that important? All films that I mention here are films that influenced my life, that give shape to the formless of my imagination, they were great films and meaningful to my life in a million ways nevertheless.

You see, when you see more than 10K of movies before you're even 7 years old, you began to think that the Oscars winners tend to be more about political agendas, than the quality of some films are not able to be measure, and that are more hidden gems on non-mainstream film industry that they would like to admit, and also than independent films have a tendency to be overly praised and non-original at the same time.

Let's begin with the foundation, a good old photo of the opening day! Here if you can see is my gramma holding both of my brothers and myself, I'm the little white Casper holding her hand, so white and feeble that I would just phase through her hand like a quantum leap if she failed to hold me tight for a minute. I loved her more than anything for years, she passed away years ago but she taught me to love musical films, and there's not a single day that I don't remember or send my love to her. There were many films in the early days, Betamax was still a thing and VHS was the new kid on the block, just arrived, and my father took a big bed, and go all-in on it, he was the first man in my city to buy VHS, to sell the reproducers and event the rewinders, here take a look of a photo of the first showcase selling rewinders in the city! For example, you could see the poster of Naked gun 2 & 1/2 just on top of a Christ portrait and under a line of posters on the wall (You're free to identify any of them on the comments) 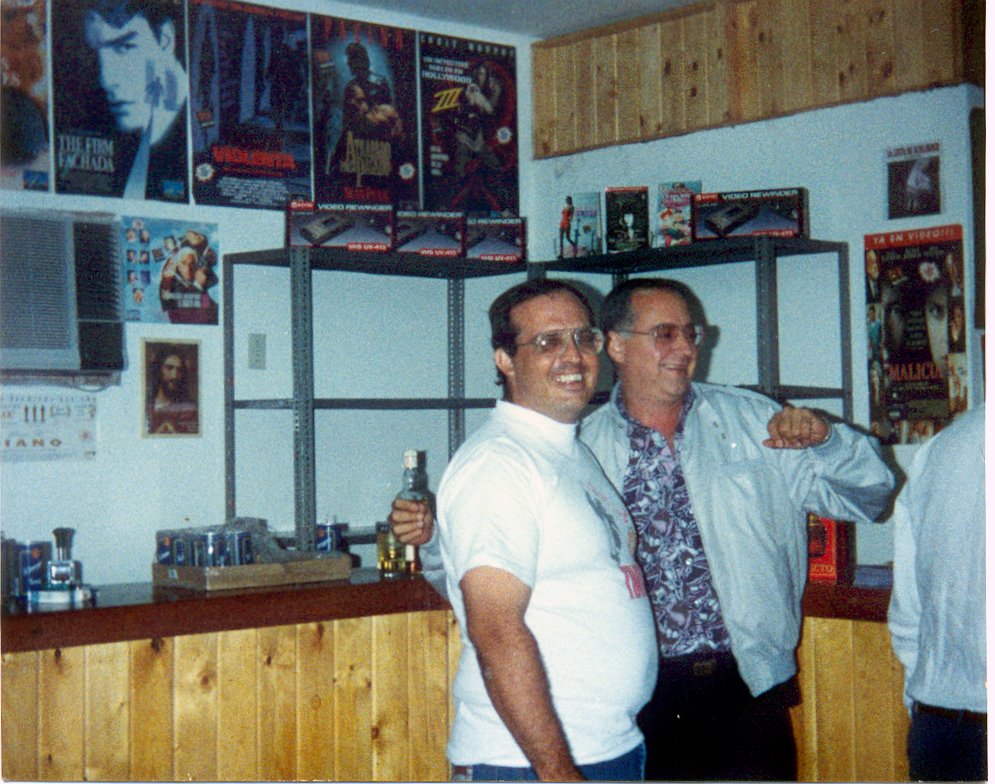 It was fun to grow up in a place filled with films, I saw all Disney classics like 150 times each, I saw all of the cartoons over and over again according to my mother, my brothers also state that I rewatch each movie until I memorized it, My first movie that did a major breakthrough on my mind was Pinocchio(1940), from Disney, a marvelous film, it helps me to Jump over the line and leave the cartoons altogether and grow to see films depicting human beings, time to sit on the chair like the big kids I said. Now I found it funny that I discover Fantasia(1940) later on, and with that movie my love for music began, it first came with classic music, but at some point, I ended up listening to Cats (2019)... And said that I didn't want to lose my time watching such a musical again, take these honorable mentions that comes to my mind at the time I wrote this: Les Miserables (2012), The Nightmare Before Christmas (1993) and please, Don't judge me Repo! The Genetic Opera. 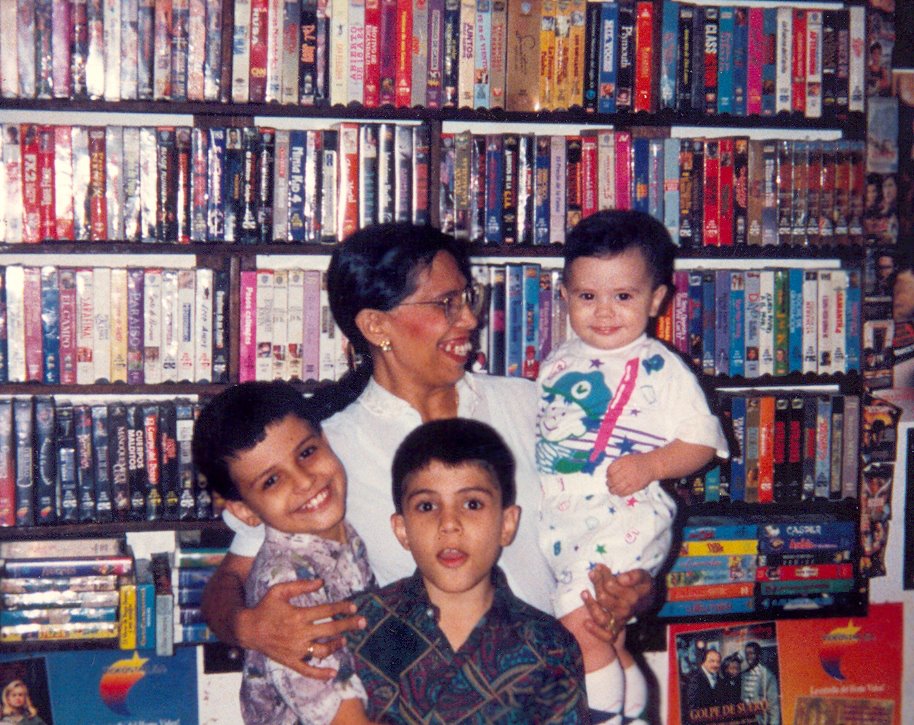 This a family portrait of sorts, my mom loved films the most, dad just saw it as entertainment of sorts, not as an art, so for him, it made no relevant difference to see Silence of the lambs (1991) (What a marvelous actor is Anthony Hopkins on this role) or Die Hard (1988), in this picture you could see all the members of my family that loved films with their whole hearth, and I will show you one more picture, with my crazy aunt that decided to show me movies that were hardcore dramas and even sci-fi, I love her deeply for those good deeds. A Funny story, did you ever wonder about that smartass kid that ruined your desire to take a movie home by telling you the end just when you look at the synopsis on the back of the VHS? It was me, I was that kid, a lot of the clients tried to dodge me with all their might because of it. 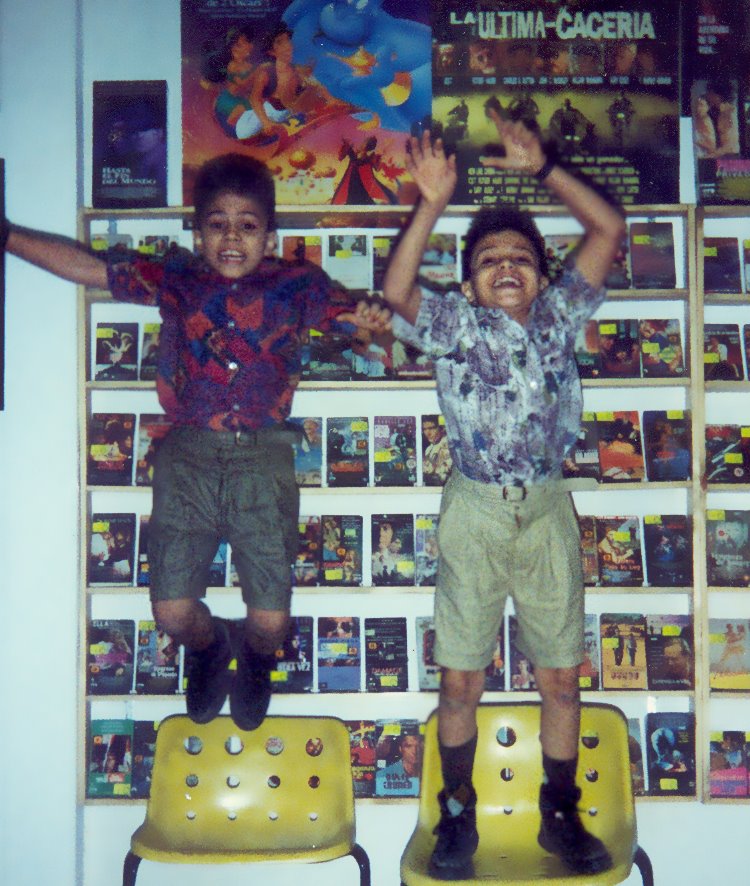 I loved to feel every emotion on each of these films that I mentioned and many more, they influenced my creativity and grow in so many ways that I can't point out "A bigger" influence made by a particular film, each of the films I saw were interesting on their own right, some may be where total failures like Titanic 2 and many others that I'm not gonna name here.

Some were deeper meaning full comedies that changed my humor permanently like Monty Python's Life of Brian (1979) and almost all of the films made by this group, this was the best scene I saw in my life, totally expected but a whole new level of humor!

I will close this post with a photo of my parent's, the video club closed like a decade ago, but I remember it with a special shine thanks to both my dad and my mom, If you loved this post don't forget to stop by the upvote box and stop by to say hello in the comments, I wish you some free time to watch a couple of films and Don't forget the Pop Corn! This post has been summited to the contest CineTV Contest: Memories

I would like to thank the team behind the translator Deepl and the Grammarly plug in for being my main tools during the creation of this text.

I really liked to read this one.

I'm glad you liked my post, I originally got to know that this contest existed because of you, your post on Jurassic Park and its influence on you got reblogged and I saw it by accident, let me to the contest, now that you saw mine I guess that the positive feedback loop is proved again, thank you for your post, and remember: Seventh Art is life(Loved that line on your post).

... I originally got to know that this contest existed because of you, your post on Jurassic Park and its influence on you got reblogged and I saw it by accident, let me to the contest...

So good to read this comment, @jesustiano. It proves that good ideas and initiatives must continue to be shared.

It's true, they must be shared.

Congratulations @jesustiano! You have completed the following achievement on the Hive blockchain and have been rewarded with new badge(s) :