dwixer in Proof of Brain • 4 months ago

The Bayajida Legend is the oral information about the origin of the Hausa society(in Nigeria) passed down from the ancient past. The Hausas are the largest group of people dotting the Nigeria landscape, they inhabit the northern geographic zone, majority of them are Muslims. They're mostly involved in agriculture, arts and design, commerce, and are survivals with high level of tolerance when it comes to business. This group found the seven states of Kasar Hausa. The states are independent of each other but not much difference is observed in their cultural practice.

The centre of the Bayajida Legend is Abu Yazid, he was a prince in Baghdad. History holds that Abu Yazid had a serious misunderstanding with his father and this made him leave his hometown to settle in another another country. He first settled in Borno Empire where he was warmly received by the king known as Mai, Years after, the king espoused his daughter to him after finding favour from the king's sight, he stayed a little while then left to Daura leaving his pregnant wife behind in Borno.

Abu Yazid arrived Daura feeling thirsty, then went in search for water to quench his thirst. The people of the village feared to introduce him to the only well in the community and explained to him how difficult it is to get water during any other days except Fridays because a snake called Sarki always present itself hindering people to fetch water. Abu Yazid couldn't wait until it was Friday, he requested to be shown the well. 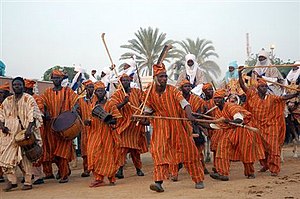 As usual, the snake came out coiled around the well. Abu Yazid fought it and was able to kill it, then cut off its head and took it home. The community rejoiced after hearing the News and the Daurama(Queen of Daura) ordered that the man who killed the snake be brought before her. Abu Yazid (Bayajida) was brought before her and he presented the snake's head to the Daurama. She was impressed as well as the community with her, after his event she married him and gave birth to a son and he was namedBawo . Bawo grew, got married and also gave birth to seven children.

These seven children founded the seven cities of the Hausa land . They're Daura, Biram, Katsina, Zaria, Kano, Rano, and Gobir. The legend Bayajida also claimed the existence of another wife, probably the woman he left in Borno who gave birth to another seven sons, not regarded as being legitimate, they were referred to as Bazan Bokwai.

This is a wonderful telling of an origin myth. It is so like others that explain the foundation of peoples and nations.

Although origin myths seem fantastic, there is always the root of truth in them and they are profoundly important to the identity of a people. Thank you for sharing this information.

Yeah, sometimes there is truth in it because it's obvious that everything began somewhere. Thanks friend for stopping by.