He’s All That : A Gen Z High School Romantic Comedy

If you’re a Gen Z, chances are you’ve heard of Adison Rae. But if you’re not, Adison Rae is a tik tok influencer/ social media personality who is now making her acting debut in a netflix rom com, He’s all that. This movie just released about three weeks ago and now, has received mixed criticism. According to IMDB He’s all that has a rating of 4.3 with 13K reviews. And after checking out the reviews, many are saying this was a poor made film but is it?

I found this movie while I was trying to spend my leisure time after getting the jab. At first, I wanted to watch a movie titled “old” which was released about a few months ago. I saw the trailer on youtube and was interested in that thriller movie. But, after getting into hyperbeam, the site that I use to stream movies, I saw this poster of Adison Rae with Tanner Bucchanan. I clicked on that and I have 0 expectations on what my journey would be since the rating was also low. Apparently, He’s all that is a remake of She's all that, a movie released in 1999, with a very simple premise, turning the ugly duckling into a prom queen(king in this case). Anyway, I was only 2 years old when that movie was released. But I watched it years later, when I was in highschool.So, I can do a bit of compare and contrast with the old one.

He’s all that has similarities to She's all that. In the past, the jocks or the cheerleaders were the popular kids but now, it’s the influencer. Adison Rae plays as a makeup, self-improvement influencer in her senior year. In this movie, the character's name is Padgett Sawyer. It’s not really far from her normal life so I think her acting was quite an okay and natural one. In this movie, followers are everything. It is basically the metrics to determine if the students are popular or not. Then, there comes a “doomer” guy named Cameron Kweller (Tanner Bucchanan). I would say he's a bit of a mix between a hipster and doomer. He values his camera alot and loves photography. He is also characterized as someone who is old fashioned and doesn’t even have a smartphone. Basically, he’s a quirky guy.

Then, much like the old movie, Sawyer has a bet with her friends. She made a bet to turn the loser guy into the prom king. Sawyer does everything she can so that she wins “the bet”. Eventually, Sawyer falls in love with Kweller and no longer just sees him as the means to win the bet. It’s the same with Kweller who thinks Sawyer is beautiful and also tells her that she’s pretty without the make up. As the story progresses, it is shown that Sawyer isn’t rich and she has been faking her life because of the pressure of becoming an influencer. The movie ends happily with Kweller and Sawyer together traveling the world and becoming a more honest influencer (I don't think there's an honest influencer but okay, this is just a movie 😂).

A Look Into Gen Z's Culture and Lifestyle

Personally, I don't think there any important message in the movie but it was doing an okay job in attempting to portray the culture and the lifestyle of a Gen Z. Though there are many things that don't make sense, I still find it quite relatable as a Gen Z. I remember that popularity back in my late highschool year was also determined by instagram followers. It wasn’t really huge like now, but it was progressing towards this same trend as in the movie.

In the movie, there is a scene of the principal and a highschool kid on a phone. They were having a conversation about how much this kid makes just with a phone and this principal was making less than him. So, this is also something that many Gen Z could relate to. Many of them make way more than someone who does the traditional job just by using their smartphone. Another attempt to criticize the influencer culture is when Sawyer was having a meltdown and she lost her follower that made her sponsor cancel their sponsorship. I think this is something common that is happening these days where if you don’t act based on what you portray, you will easily lose sponsorship. And you can gain it back if you get more followers or people take another interest in you after a scandal or a problem. There was also a birthday party scene with the roaring 20’s theme and dress like Fitzgerald. Kweller basically hinted that it fits the shallowness of everyone around him. I mean, I couldn’t agree more, there’s something broken behind all that glitters just like how culture among youths these days when it comes to social media and its impact on our day-to-day life. Obviously, there are the positives but I wouldn’t just shrug the negativeness that comes from it. Where many are pressured to be something they are not and competing for likes and approvals from strangers.

An okay job for a debut movie

After watching the movie, I am not sure what is the fuss about Adison Rae’s acting but I think she was doing quite okay for a debut movie. This movie is not for everyone and I think if you like romantic comedies or just want to know an exaggerated culture of Gen Z, I think this is the movie. There’s the dance, the tiktok, all for the grams, it’s all in this an hour and half movie. Afterall, It was not so bad. I would rate this movie 5 out of 10 and I could see this movie being played in the next 10 years, just in case someone’s going to wonder about the culture of Gen Z.

Overall, it was quite an okay watch while trying to rest and not think about anything. I have been told to stay away from the news and this movie helped a little bit.

Hope You Enjoyed This article!

Submit
0.00 CINE
116 votes
Reply 12
Sort:
[-]
poshtoken  10 months ago
The rewards earned on this comment will go directly to the person sharing the post on Twitter as long as they are registered with @poshtoken. Sign up at https://hiveposh.com.
100%
-100%

Teen romantic dramas are not my favorite genre, but the actress is pretty enough for me to watch this movie haha I don't remember seeing the original '99 movie, I'm trying to remember something, but no, I don't think I ever saw it.

I see :D, her being pretty is probably another reason why many watch that movie. Though yeah, according to IMDB, the ratings are higher from female than the male part. So, I guess, it was probably from her female fans?

Surely the movie has been successful is because of the protagonist, I didn't know anything about this Tik Tok influencer, but apparently Hollywood is taking advantage of the popularity of celebrities of this generation to make money. Good move by Hollywood, they know that with their millions of followers they have an audience that will pay to see the movie.

The IMDB rating demography says otherwise. Younger people tend to rate this movie lower than the older generation. As I also mentioned in another reply.

This review is good. You should feel good. I wanted to watch the movie but as each paragraph passes I feel like it's just another waste of time after watching some documentaries tackle on the same topic. Probably would have watched if I wasn't saturated with Gen Z negative sentiment.

It's not that kind of movie that has many interesting messages behind it, so it's something anyone can skip. Also, I thought it would have better rating comes from Male and younger audience but eh, this IMDB rating demography says otherwise. 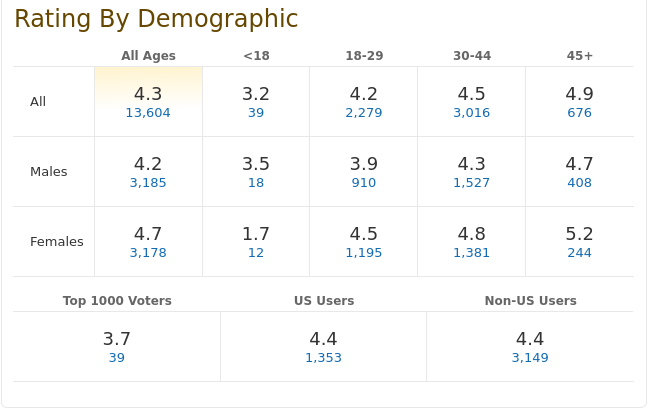 I don't pay attention to online ratings. The thing about these ratings is that it's available for scoring based on whoever signs up to bother. So if someone just has a lot of free time without being meticulously about the review, they can make that say, and just add more people like that and you get a group consensus. It goes both ways to good and bad ratings.

I've not brought myself to watch it...just think it'll be too cheesy